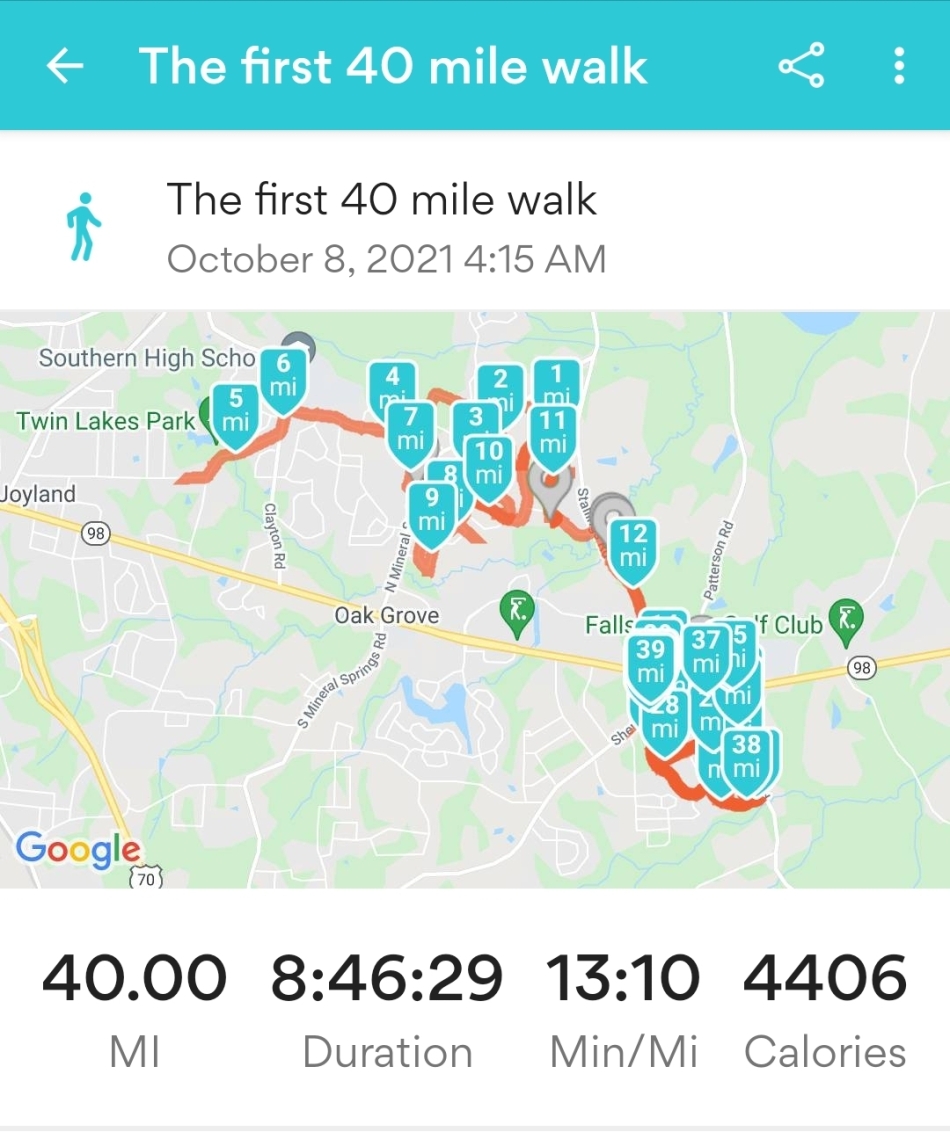 Hey, y’all! It is time for another #WalkForever training update! It has been a while since I’ve completed a full day of walking, but I was so ready to try out these new shoes! And here we go… The weather for Friday was calling for rain. Thankfully, when I woke up, the weather called for cloudy skies all day. Yet once I was outside I felt, and saw, light droplets of rain and it had no intention of stopping anytime soon. Whatever. I was determined to see this 40 mile walk through that day. It was a quarter after 4 when I officially started the walk. The first 10 miles was kicked off with “Invincible” by Michael Jackson. The temperature is 66 degrees. The drizzling is a hindrance because I can’t see with my glasses on. The shoes are incredibly light and comfortable. My overall pace for this set is 12.54. I walked a total of 14 hills during this set. The second 10 miles was kicked off with “The Spider-Man 2 Theme” from Spider-man 2 soundtrack. My average pace for this set was 13.02. That was slower but not too bad. I walked up a total of 11 hills during this set. If my memory is correct, the drizzling eased down close to the end of this set. The third 10 miles was kicked with “Black or White” by Michael Jackson. The temperature was now 68 degrees with cloudy skies. My average pace was 13.03, which I’m actually proud of! I walked up a total of 15 hills during this set. Now the shoes at this point were still wonderful, but my feet were starting to feel “rough around the edges”. The final 10 miles was literally motivated by the Man of Steel Soundtrack. I am NOT a Superman fan but that soundtrack got me through those last miles! I walked up a total of 14 hills during this last set. My overall pace for the entire walk was 13.08, which isn’t bad. However I ended up finishing the walk at close to 9 hours. I wasn’t too thrilled about that, to be honest. I couldn’t help but think what my time would’ve been last week, if the tracker hadn’t gave up on me. So, as always, I will just have to try again. Following this post will be a “Leg Progress” and “Fuel” post. I hope followers are doing well. Thank you all for continuing to follow this superheroic fitness journey. My legs certainly aren’t thanking me right now🤣 Coming next week: “The 63rd day of #WalkForever training!”